Everyone knows dogs love to sniff, but we tend to think of it as a distraction, that walks should be for exercise, not wasting time dawdling and sniffing. But exercising an animal’s mind is important too, and a substantial part of the dog brain is devoted to smells.

A study–“Let me sniff! Nosework induces positive judgment bias in pet dogs”– published last year in Applied Animal Behaviour Science shows that letting dogs use this natural behavior in the sport of nose work contributes to their wellbeing and has implications for what we should all do with our dogs.

In the study, two groups of dogs were taught that a bowl in one spot would always contain food, and a bowl in another spot would always be empty. Then they were presented with a bowl placed midway between those two spots, and researchers measured how fast they ran for that bowl.

This is called a test of “cognitive bias,” the effect that emotional states have on judgments. More informally, we can think of it as testing how optimistic the dogs were about that middle bowl.

“The idea is, if the dog is expecting it to contain chicken, they’re expecting a positive outcome, they’ll get there faster, and they’re considered to be more optimistic,” says Zazie Todd, PhD, author of the website Companion Animal Psychology and the forthcoming book Wag: The Science of Making Your Dog Happy. “Whereas if they’re slower to get there then they’re not expecting this positive outcome, and they’re considered pessimistic.”

Next, one group spent two weeks taking a heelwork class, where dogs are rewarded for walking close to their handler. The other group took a class in nose work, which involved searching for treats in boxes by sniffing. Both classes involved food rewards.

Afterward, the cognitive bias test was administered again, and measurements showed that the dogs in the nose work group ran faster toward the middle bowl than before the classes, while the dogs in the heelwork group did not.

The researchers conclude that nose work training gave the dogs a more positive outlook: they were more optimistic about whether there would be food in the middle bowl. Heelwork training didn’t have this effect, even though both kinds of training used positive reinforcement.

The results suggest that nose work is especially good for canine welfare, and the authors suggest two reasons for this. One is because it allows dogs to use their natural ability to sniff. “We all know that dogs like to sniff and that smell is how they experience the world far more than sight,” says Todd. “We know that when we’re providing enrichment for animals, it’s important to involve their most important senses, which for dogs is smell.” 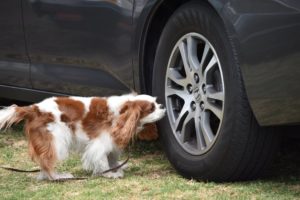 The other is that nose work involves independent problem solving (something that other research has shown is rewarding to dogs) and using their initiative to make choices (something that has been proposed as being fundamental to animal welfare).  “They have more autonomy in nose work,” says Todd; “they’re deciding which box to go to first.” That contrasts with heelwork where dogs have no choice about what to do; their job is just to stay close to the handler.

Todd believes this study has important implications for dog owners.

“It means that you should be giving your dog chances to sniff and you should as far as possible let your dog have the chance to make choices.”

Any Dog Can Do It

And unlike many scientific studies, this one has results you can put to work with your own dog right now.  Nose work is a sport that doesn’t require youth or athleticism. “It’s even suitable for senior dogs, who can just work at their own pace,” says Todd.

Nose work competitor and teacher Sarah Owings agrees. “Any dog can find treats in a box, so it’s a wonderful food enrichment game.”

Owings has seen real-life evidence that nose work is good for dogs. “I’ve heard of a lot of dogs who are fearful and reactive, but they’re not that way at trials,” she says. It has also been positive for her own two dogs. One is a field Labrador who ended up in a shelter because of his high energy and drive. “He’s exceptional at nose work,” she says. “All those traits that would make him a hard pet make him an excellent nose work dog.” Her other dog was once fearful of strange places but has learned to love them via nose work.

Owings also thinks nose work has a positive effect on people’s relationships with and understanding of their dogs. “In nose work, we’re asking the 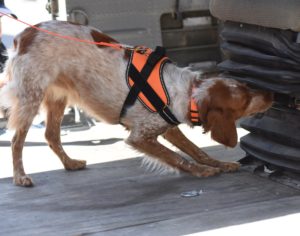 dogs to shine at what they already do so well,” she says. “It lets the pet owner let their dog be a dog and actually celebrate that instead of fighting those instincts. The dogs lead the search. You can cue them to start, but they’re in charge of solving the problem,” she says. “Owners go to classes and learn how their dogs look when they’re catching odor and following odor and watch them solving problems, and they have a whole new appreciation for their dogs.”

While the study doesn’t test other ways to let dogs use their noses, it suggests that those things are also good for dogs. Owings suggests hiding a meal or food toy and letting dogs search for it. Todd points out that independent of the sniffing factor, other research has shown that dogs prefer to work for their food. “The effort is rewarding in itself,” she says.

And when you’re walking, let them sniff!  “Instead of you leading the dog, go to an interesting spot and let the dog lead you for a while,” says Owings. “Slow down and let the dog meander for maybe 20 or 30 percent of the walk. That would be so good for dogs.”