A diagnosis of FIP used to be a death sentence, but that’s changing. Like the disease itself, the story is complicated. Here’s what we know now.

First, and most exciting, attending researchers agreed that FIP should now be called “treatable,” at least potentially, and perhaps “curable.”

A conference about FIP took place last November, drawing attendees from around the world, including veterinary professionals, veterinary students, cat fanciers, shelter/rescue workers, and cat lovers whose pets have experienced FIP. The World Small Animal Veterinary Association and American Association of Feline Practitioners were represented. Many others watched a live feed.

The presenting scientists at the Winn Feline Foundation symposium PURRsuing FIP and WINNing were all experts in FIP development, diagnosis, transmission, and treatment. They included opening speaker Niels Pedersen, DVM, greatly responsible for first describing FIP many decades ago. All have at one time been funded by nonprofit Winn Feline Foundation, which supports cat health studies.

FIP kills approximately 1.3 percent of cats worldwide. That’s a small percent, but it represents millions of deaths annually. While FIP can infect any cat of any age, some believe pedigreed cats are overrepresented, and by far most FIP occurs in kittens.

There are two kinds of FIP: wet (effusive) and dry (non-effusive). In wet FIP, fluid builds up in the chest and/or abdomen. It looks as if these kitties have a beer belly. Kitties with dry FIP don’t appear any different, but like all cats with FIP, they act differently. Early signs may include a lack of appetite, lethargy, and fever. They simply don’t thrive.

Why some cats and not others? This was a topic of great discussion at the symposium. Geneticist Leslie Lyons, PhD, Gilbreath McLorn Endowed Professor of Comparative Medicine in the Department of Veterinary Medicine & Surgery, College of Veterinary Medicine, University of Missouri –Columbia, said, “The answer is we really don’t know anything about the genetics for FIP at this point in time. We make presumptions regarding breeds, but we need to know much more.”

FIP and Stress: Is There a Connection?

Many shelter professionals discussed how minimizing stress in shelters has lessened the volume of FIP in shelters.

Dr. Pedersen has been chasing a potential FIP treatment for decades. In his talk, which kicked off the day-and-a-half-long symposium, he talked about how two drugs may now actually cure FIP.

The available medications are from China and are sold on the black market. Do these products work? Sometimes. 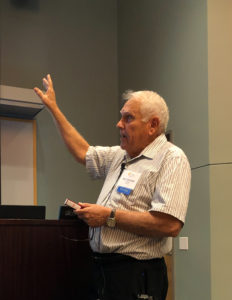 drug GS-441524 to combat FIP. In clinical trials, Pedersen was blown away by the drug’s effectiveness, at least for wet FIP. However, GS wasn’t readily able to cross the blood-brain barrier to treat neurologic FIP.

However, Gilead refused to pursue approval of GS-441524 from the U.S. Food and Drug Administration (FDA) for treatment of FIP or to give up its patent.

Pedersen persevered in conjunction with collaborators at Kansas State University. That effort was led by Dr. Yunjeong Kim, associate professor in the department of pathobiology and diagnostics in the school’s College of Veterinary Medicine, who attended the symposium. Kim and her colleagues created a similar antiviral compound – known as GC376 – which also proved to have a high degree of success in treating the wet form of FIP.

Ultimately, as in treating HIV AIDS today in humans, Pedersen explained the final solution will likely be several drugs. “We’ve kicked open the door to understanding; we now know the class of drug, and what we’re looking for in the drugs,” he said.

Meanwhile, Anivive Lifesciences, an animal-health pharma company, has been paying attention and understands the need for a drug. Anivive’s chief medical officer, Dave Bruyette, DVM, DACVIM, announced at the symposium that the company is in the process of procuring FDA approval for GC376 to treat FIP. Seeing it come to market could be a long way off, although the company will attempt to “fast track” with the FDA’s Center for Veterinary Medicine to accept GC for minor use for major species (MUMS) approval.

At this moment, then, there’s a void in the marketplace. Several Chinese companies have jumped in, selling compounds to “treat” FIP via the black market. The most prominent of these sellers is a company called Mutian Biotechnology. Several company representatives attended the symposium, including its chief executive officer Lu Ziyu. Also in attendance were cat owners whose cats have reportedly been cured, to the tune of about $4,000, using Mutian’s compound. The cost varies depending on the size of the cat.

So, what exactly is in that Mutian compound? The company isn’t saying.

“We don’t know what this stuff really is,” said Pedersen. “It’s definitely the Wild West out there.” He cautions veterinarians against ordering the black-market product but adds there is nothing preventing a cat’s caretaker from doing so.

“Some veterinarians will say, ‘No, I don’t want anything to do with this.’ And I can understand because that ends the possibility for any legal problems. I would answer it this way. Is there anything you’re doing in this situation that would be counter to it or is your participation supportive of what your oath is?”

Glenn Olah, DVM, DABVP (Feline), is immediate past president of Winn Feline Foundation and a feline veterinarian in Albuquerque, New Mexico. “It’s definitely an individual decision,” he said. “But I’ve supported one client so far, and the cat is thriving [on the Mutian drug]. I figured if the client is game, we all want these kittens to live.”

Susan Gingrich raises money for FIP studies and supports the nonprofit Winn Foundation Bria Fund (named for her own kitty who succumbed to FIP). She isn’t a fan of the black market. “There are things out there that can help cats live longer and better with FIP; living with a chronic disease is possible. The best thing is to get that diagnosis as soon as you can. Start something, be it doxycycline and prednisolone, or polyprenyl immunostimulant (PPI). It may work, it might not. I don’t believe we should make a scientific experiment of our own cats.”

Al Legendre, DVM, DACVIM, professor emeritus from the College of Veterinary Medicine at the University of Tennessee–Knoxville, researched PPI and conceded that only a small subset of cats with dry FIP may benefit long term from the biologic.

“Yes, of course you give symptomatic treatments such as esophageal tubes to make sure they get enough nutrition, supporting nutrition in other ways (such as appetite stimulants like Mirataz), draining cats with effusive FIP, and so on,” Katrin Hartmann, Dr. med. vet., professor of internal medicine and head of the clinic of small-animal medicine at Ludwig Maximilian University Munich in Germany. “We have done a lot of things. But if prednisolone does something, it usually makes them feel better and gives them more appetite. And there’s a chance they’ll get better, but mostly they eventually just go downhill.”

Peter Cohen, who raises money for FIP studies via his nonprofit organization, Zen By Cat, said, “This is the first time we’re able to talk about this openly. Everyone is afraid. Gilead and others who spent money—they want to protect their rights (to their drug). No one is disputing that. But today the only way you can cure an FIP cat is through these Chinese companies. Sometimes it’s intercepted (by U.S. Customs), and there’s a pretty expensive price tag. This isn’t ideal. We’d rather have an approved drug. But cats with FIP can’t wait for an approved drug.”

The possibility of a vaccine was discussed by several at the Symposium. Drew Weigner, DVM, ABVP, a feline veterinarian in Atlanta, Georgia, and president of Winn Feline Foundation called the initial vaccine of many years ago “an absolute failure,” which all agreed.

Today we know far more about vaccines and specifically about FIP, so development of an effective vaccine is possible. Gregg Dean, DVM, professor and department head in the Department of Microbiology, Immunology, and Pathology, College of Veterinary Medicine and Biomedical Sciences, Colorado State University, Fort Collins, said, “When it comes to vaccines, we all have a home run in mind, one shot and durable lifelong immunity. Or maybe there is a vaccine needed to protect cats only when in high-density situations, such as shelters or catteries.”

To learn more about FIP and the findings presented at the symposium, visit www.winnfelinefoundation.org.

Steve Dale, CABC (certified animal behavior consultant), hosts two national pet radio shows and is on WGN Radio, Chicago. He’s a regular contributor/columnist for many publications, including CATSTER, Veterinary Practice News, and the Journal of the National Association of Veterinary Technicians in America. He’s appeared on dozens of TV shows, including Oprah, many Animal Planet Programs, and National Geographic Explorer. He has contributed to or authored many pet books and veterinary textbooks such as “The Cat: Clinical Medicine and Management” and co-edited Decoding Your Dog, by the American College of Veterinary Behaviorists. He speaks at conferences around the world. www.stevedale.tv.