A major conundrum of the cat world is the profusion of feral cats.

Robin Olson, president of Kitten Associates in Sandy Hook, Connecticut, recently trapped the most beautiful tabby-marked Siamese kitten in her yard. Dubbed Silas Buttonwood, he will be vetted, neutered, fostered, and placed in a loving home.

He is proving to be a challenge. 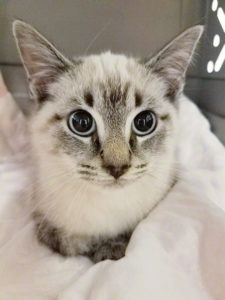 “He is a wild animal, but he has the potential to be socialized so he can live with humans,” said Olson. “He needs consistency and trust… I have to respect his wild heart.”

Silas was staying in Olson’s “blue bathroom,” the first stop for her fosters, but was still showing fearful behavior. Olson decided to move Silas from the bathroom to a large cage in her living room where he could get used to household noises and have more attention. Her job was to remain calm and maintain a routine that would help him feel safe.

The transition was tough. At first, Silas refused to eat but changed his mind and was soon resting on his familiar blankie. Olson observed that he likes seeing the other cats and her webcam shows him playing enthusiastically with a Turboscratcher during the night. She said he’s less shut down and is showing “a softer side to his cat nature.” He even responds to his name.

After a couple of days, Olson saw changes. She was feeding him some delicious treats using a long spoon and was able to bring it closer. She petted him and saw his butt rise – a term known as “elevator butt”– which invites attention. He also offered a head butt against her hand. (Hands can be scary to feral cats.) The breakthrough, however small, moved Olson to tears.

The belief that cats are self-sufficient and can hunt for their food leads all too many people to consider them disposable. And that often comes in the form of females who are not spayed and subsequently have multiple litters of kittens.

The task of caring for these cats is left to dedicated groups of advocates. Their hands-on experiences are the best blueprint for transitioning feral cats who might adjust to the safety of a loving home.

Cat lovers work tirelessly to trap, neuter, and return the cats to a safe place (a process know as TNR), creating communities where they are sheltered and fed.

Pregnant females are taken in or trapped with their kittens, who are fostered and socialized, then placed in loving homes. But what to do with the mom after the kittens are weaned? Or the handsome tom, who had a medical issue and was treated and neutered?

Let the Cat Take the Lead

Gail Szeligowski of Killingworth, Connecticut, has fostered and adopted a variety of cats over the past 10 years, many through Branford Compassion Club, a local feline rescue and adoption organization. Like many adoption organizations, BCC relies on a network of skilled fosterers who lovingly wean and socialize kittens and cats before they’re placed for adoption in the shelter. Director Lianne Soucy says they work with 30 to 40 people, who follow the guideline that “the animal leads the way.”

Szeligowski says these cats “need time to decompress and acclimate. Whoever does this cannot have an agenda. There is no timeframe…. Every 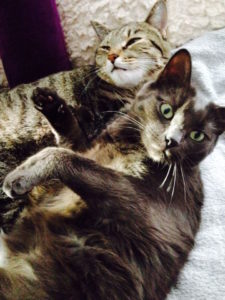 It’s a step-by-step process. Szeligowski starts ferals out in a condo cage or a large dog cage within her finished basement, which has a large bathroom. Once they are acclimated to the cage, they are allowed into the bathroom to play.

She places litter boxes in small spaces, and generally has one box plus one extra per cat.

She has different tactics for different cats. Her process includes sitting quietly with them and talking, offering treats, and engaging in play.

Another tactic is to offer yummy food at the end of a long spoon; the cat learns that good things come at the end of the spoon. Offering cave-like beds and cat towers allow cats to hide or climb so they feel safe. Toys and scratching pads permit them to fulfill natural behaviors.

She tries to interact with the cats several times a day. Both she and her husband, Mike, work on socializing the cats. She stresses that it’s better to involve everyone in the household as the cats progress. It’s also important to get the cats used to regular household activities such as vacuuming and bedmaking.

When they’re ready, they transition from the basement to an upstairs bedroom and eventually to the rest of the house, including a slow introduction to other cats in the home.

Szeligowski shares the story of Beardsley, a foster who was fearful and aggressive. She says his “defining moment” came when he was introduced to her other cat, Scooter.

“He became happy. He became calmer,” she says. “He is one cat I cannot pick up to this day. But he has become the most loving cat on his terms.”

Sally E. Bahner has more than 40 years experience as a writer and editor on topics ranging from construction to cats. She specializes in cat-related issues, specifically nutrition, holistic care, and multiple cat behaviors. Bahner is an award-winning member of the Cat Writers Association and the Connecticut Chapter of the Society of Professional Journalists. She resides in Branford, Connecticut, with her husband Paul, and cats, Tekla, Mollie, and Sofiya.

10 Tips for Low-Stress Moves With Pets