Have you ever developed a food aversion? To this day I avoid artificially flavored grape candy because that was the flavor of the cough syrup I had to choke down when I was sick as a kid.

The same thing can happen to pets when they don’t feel well.

Several months ago, my dog Dorie developed severe gastrointestinal issues. Her appetite decreased, she was trembling with nausea and pain, and nothing obvious showed up on her bloodwork or ultrasound. I could hear terrible rumbling coming from her gastrointestinal tract and she even stopped her favorite pastime of body slamming her toys against the couch. In the few days before she got really sick, I was doing what many pet owners do out of desperation–medicating her by giving a pill hidden in a meatball of canned food or a flavored pill wrap.

Although Dorie can’t figure out how to go through a door that’s slightly ajar or get her food puzzle out from under the couch, she is really smart in other ways, and this includes being able to sniff out any medication that I try to hide. I was always jealous when I heard about clients’ dogs who would eagerly gulp down any medication thrown on top of their kibble, trusting that anything in their food bowl must be a tasty delight. Dorie had to be outwitted.

While this was manageable when the medications were limited to her heartworm and flea/tick prevention, when I was having to medicate her multiple times a day and she had no appetite, it became a huge stressor for both of us. At one point when I was giving her a slurry of a normally palatable probiotic through a syringe, the look she gave me—betrayal combined with weariness and misery–was so heartbreaking that it made me feel like the worst owner in the world. Dorie still refuses to take that probiotic because she developed a food aversion to its flavor.

Beyond that, pets who endure force feeding when they’re nauseated or made to swallow bitter medications can also start to develop fear, anxiety, and stress (FAS) around these treatments and avoid their owners when they learn what’s coming. Our pets may hide from us or scratch or bite to get away, and if they struggle enough, they may even be at risk of developing aspiration pneumonia if they accidentally inhale liquid medication or canned food. It’s also difficult for us to meet their daily calorie requirements by syringe or force feeding. Think about how many spoonfuls it takes for you to finish a meal and imagine multiplying that by three to four meals a day for seven days a week, and it starts to seem insurmountable.

When Dorie didn’t improve with hospitalization, I took her to a specialty clinic with a plan to have an endoscope passed into the upper part of her GI tract to obtain biopsies and suction out the fluid that was building up in her stomach. Prior to the procedure, the internist asked me if I wanted him to place an esophagostomy tube (E tube) at the same time.

An E tube is a flexible tube that is passed through an incision on the left side of the neck, directed into the esophagus just in front of the stomach, and sutured in place on the neck. It’s often a recommended treatment for a pet who either can’t eat due to an oral injury such as a fractured jaw or won’t eat due to illness. It can also be used to deliver medications and water. Many pet owners worry about the general anesthesia required, but the procedure doesn’t take long–typically less than 30 minutes.

You may associate an E tube with end-of-life care and feel overwhelmed at the prospect of managing one with your pet. An E tube is simply a 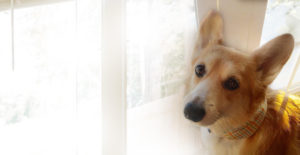 delivery vehicle for food, water, and medications, and won’t prevent your pet from doing any of their normal activities during their convalescence–eating, drinking, playing, or grooming. Yes, your pet will have a tube coming of their neck, but the site of the opening, called a stoma, is small and the whole area is typically covered with a bandage or a festive neck wrap called a Kitty Kollar or Kanine Kollar. Dorie was really sick, and I was worried about her going under anesthesia, but I also knew that If I didn’t consider having an E tube placed, she could die from lack of calories and from my inability to medicate her. An E tube would also give me an invaluable Fear Free tool:  the means to easily deliver treatments to a pet who needs these things to survive but does not want them.

Dorie was released from the specialty hospital with her E tube and seemed in much better spirits, but as soon as she got home she drank a lot of water and promptly vomited it back up. After my panic subsided, I crushed her anti-nausea medication into a powder, dissolved it with some warm water, and delivered it slowly through her E tube. From that point on, I felt a huge sense of relief. No matter how poor her appetite was that day or how many medications I had to give her, the E tube was a lifeline and turned Dorie into one of those dogs who would eat anything thrown into the food bowl–all I had to do was make it into a warm slurry, flush the tube with warm water before and after, and deliver it slowly through the tube. While Dorie’s appetite gradually returned and she never had to be fed through her tube, my partner and I medicated her through the tube for weeks. We also cuddled her, walked her, and gave her the TLC she needed after hospitalization.

My partner is not in the veterinary profession and after the first day, he felt comfortable administering medications, cleaning the minimal amount of discharge around the stoma site, and replacing the bandage like a pro while Dorie sat patiently on the couch. Short of occasionally scratching at her bandage, she didn’t seem to notice her E tube at all. After a few weeks she began feeling better, and with her tube in place, started body slamming her toys again. Eventually she no longer needed her tube, and when it was pulled, the stoma site closed over completely in a couple of days.

E tubes can save the life of a pet who is critically ill, and yet many pet owners–myself included–struggle to treat their pet at home while their pet gets sicker and sicker, taking in only a fraction of what they need to get well. It took my experience with Dorie to realize that we should never lose sight of what our pets are going through mentally. They trust us to do what’s best for them, and when they are in a physically fragile state like Dorie was for weeks, taking a Fear Free approach to their care becomes fundamental to their health.

Julie Liu, DVM, CVA (Certified Veterinary Acupuncturist) is a small-animal veterinarian who practices in Austin, Texas. In addition to advocating for Fear Free handling of pets, she is passionate about feline medicine and senior pet care.