Dr. Jane Goodall hadn’t heard about Fear Free, but the idea resonates with her. Considering animal emotions is something she once fought for.

It’s hard to think of Goodall as a controversial figure, but when she first began her observational notes on chimpanzee behavior at Gombe National Park in Tanzania in the early 1960s, she was criticized by colleagues for naming her subjects, recording individual personality traits, and documenting emotions.

“I was told to give the chimps numbers, not names,” she says. “Scientists then were outraged that I actually recorded and wrote about individual personalities and emotions because according to them, personalities and emotions were restricted only to humans. As a child, I learned from my dog and other dogs in the neighborhood, they all have their own personalities.”  Goodall pauses and laughs, saying, “Of course, anyone with pet cats and dogs has known this for a very long time.”

Goodall persevered, adding that if she knew dogs expressed and felt various emotions – similar to our own – the same must be true for our closest relatives.

Goodall smiles and holds up plush animals she had laid out on the sofa next to her. “This is why I travel with Ratty,” she says, holding up a plush 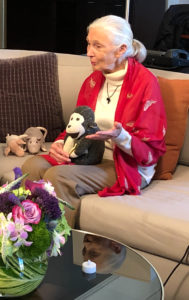 rat. “Even rats have feelings. And cows; it’s horrible how we sometimes treat cows, as if they have no feelings, but they do. And pigs; they’re as smart as dogs.”

Goodall says that by the time she received her PhD at Cambridge, her work had been publicized by National Geographic, and chimps she had named, like David Greybeard, Mr. McGregor, and Goliath were known to TV audiences. At that time, this further outraged the scientific community. “I was told that I was doing everything wrong,” she says. “Their feeling was that I couldn’t write or talk about animal emotions because they don’t exist.”

Today, thanks to our knowledge of neurochemistry, we know animals feel real emotions. All great apes have nearly identical brain chemistry, and humans are, after all, members of the great ape family.

Goodall supports the notion of Fear Free. “I do know there are ways of alleviating fear in animals,” she says. “There’s a lot of communication that so many people wouldn’t believe it, but now we understand much better. Why wouldn’t we help to fix it?”

Today, Goodall, who just turned 85, travels nonstop, more than 300 days a year across the globe as an advocate for protecting the planet. And there’s talk of her earning a Nobel Peace Prize because she’s making the world a better place, for humans and animals – for the entire planet.

At Gombe, the Jane Goodall Institute has afforded people improved healthcare and education and offered various tools to get out of poverty. “Now cutting down the forests is no longer necessary to improve their lives,” she says. “They understand that saving the forests isn’t only saving chimpanzees and other wildlife, it will also save future generations of their people. So they’ve become partners with the environment. Where there were barren hills around Gombe, now trees have come back.” This program is a model that now has been replicated in six other African countries.

Goodall says, “Too many animal-rights people leave people out of the picture, but the reality is that we’re all in this together; we are all interconnected.”

“The idea is that whether you live in China or the U.S. or in Africa, we are all the same,” she says. “True, we live in different environments, our cultures may be different, and our religions may be different, but we all share two fundamental facts. We are all human. And we all live on the same planet. Each Roots and Shoots program chooses three projects of their own choice, one to help animals, one to help people and another to help the environment. I think we have around 2,000 groups across China alone.”

She continues, “I am confident that young people are rising to the challenge. They must. It’s our future. They realize what’s happening. They can’t ignore climate change, and how forests are disappearing, and how our oceans are filled with plastics. They are our hope for tomorrow.”

Among Goodall’s countless accomplishments were her support for abolishing use of chimpanzees for medical research by the U.S. government and others and fighting against keeping them in small cages with little or no stimulation.

Saving the Planet for Everyone

Fear Free is about enriching environments – whether for dogs and cats or pet birds or pet lizards in our homes to animals in zoos, the very opposite of what those chimps endured. It’s another reason why Fear Free resonates with Goodall.

“Every single day, every single one of us lives – every one of us makes an impact on the planet,” she says. “We have a choice about what that impact will be. And consider even the little choices – they’re not little – what we buy? Did it harm animals? Will it harm the environment? Is it cheap because of child slave labor? If we make ethical choices together – millions of us – it will matter. We can all make a difference.”

Officially Jane Goodall is a United Nations Messenger of Peace, and unofficially I suggest she is an ambassador for the planet.  She has touched millions of lives, but that’s not enough. The world clearly remains a dangerous place, and our planet itself is at risk as a result of climate change. She agrees that the Nobel Prize would allow her to reach even millions more. And at 85 she talks about how she doesn’t have 30 more years to get the job done.

Still, Goodall must take a breath every now and then, and I asked her what makes her happiest? “The serenity of being out in a forest,” she says. “And spending time with a dog.”