The idea of dressing up your pet may seem silly, eccentric, or just something novel to do for a couple of moments during the holiday season. But putting clothes on your dog or cat, and acclimating them to it, may be useful for a number of reasons. Take, for instance, the situation Paula G. found herself in when her silver shaded Persian cat, Truffle, was recovering from bladder stone surgery. When the vet tech brought Truffle out from the back room, the cat was decked out in a onesie.

“She said they find it works better with cats [as opposed to the cone-shaped Elizabethan collar], especially when there are stitches on the abdomen,” Paula says.

The Elizabethan collar, or “cone of shame,” has long been one of the most frustrating  parts of the healing process for pets and their people alike. It’s unwieldy for the animal, interferes with eating and moving around, and looks as uncomfortable as it undoubtedly feels. Whether it involves surgery sutures or skin conditions, something that fits snugly on the body seems like a better idea, in many cases. 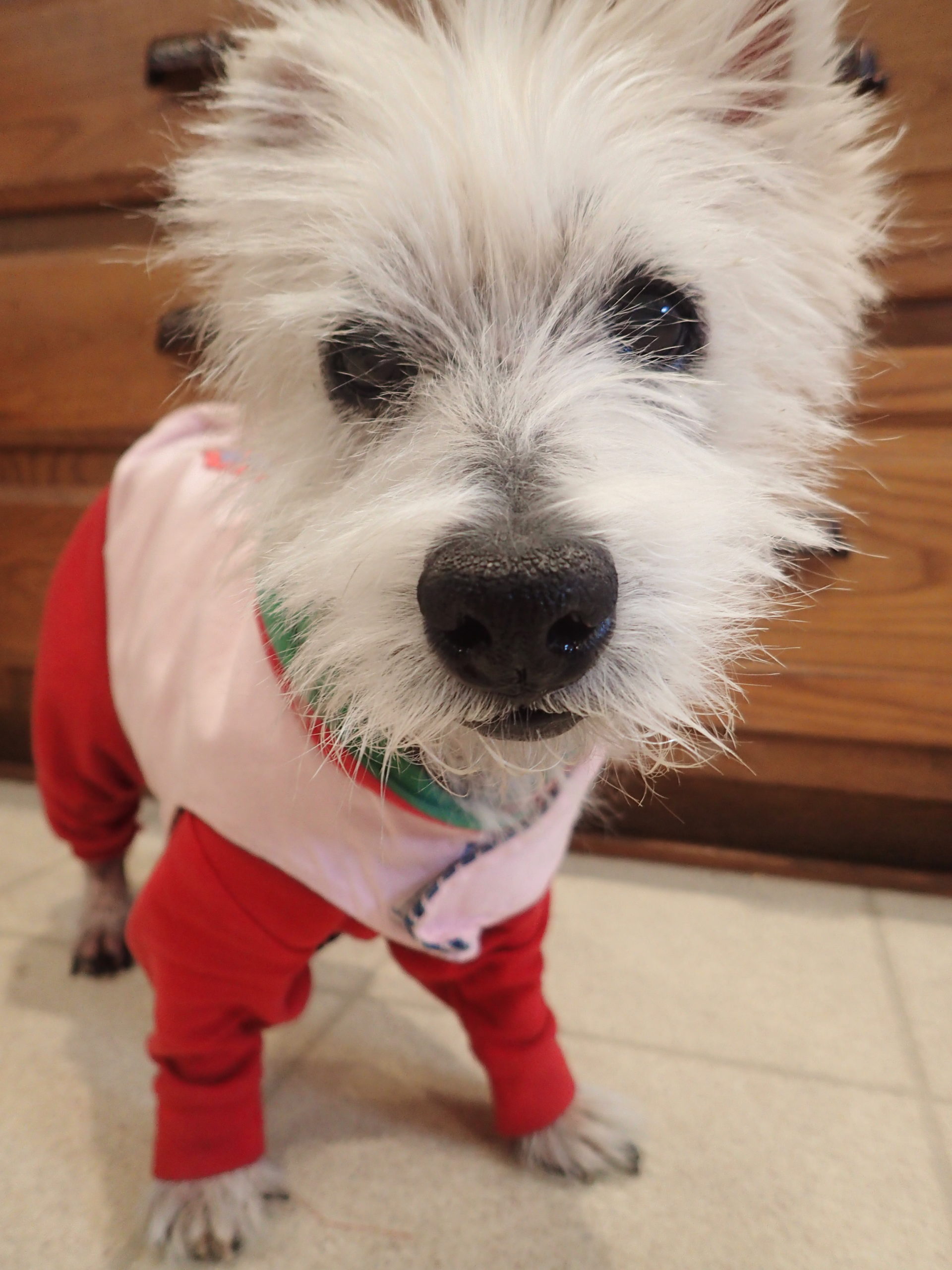 Kimberley H., who owns three Westies, found onesies more practical for her younger dogs after their spay. “We tried a cone with one of the puppies,” Kimberley says. “She absolutely hated it, was thrashing to get it off. She took to the onesie right away.” Her older Westie, Finley, has a skin condition and wears clothes to cover it up. “She always tries to scratch herself and rubs her skin raw,” when she wears a cone, Kimberley says. “The clothes keep her comfortable and allow her to easily eat or drink water when she wants. Her eyesight isn’t obstructed, and we can pet her and she can give us kisses—that’s a lot harder with a cone.”

Lisa Radosta, DVM, a Florida-based veterinary behaviorist, uses onesie-type outfits in her practice, “to protect incision sites and healing wounds, among other things.”

Many pet parents also claim that a snug-fitting jacket, such as the Thundershirt, helps fearful pets deal with stressful situations, such as fireworks on holidays, thunderstorms, or even travel. “I have clients who claim that pressure wraps are effective for their pets,” says Dr. Radosta, although “the research that has been done on the most popular wraps shows that they have no significant effect on anxiety.”

Even so, the anecdotal information is compelling. Rachel P.’s Westie, Preston, can be a nervous flier. “He makes little whiny noises and noses your hand to pay attention to him and pet him,” she says. “He also wants to me hold him in my lap, versus laying on the floor of the plane, where he knows he is supposed to be.” He is much calmer and well behaved with the shirt on.

Joanne M.’s cat, Gracey, was also helped by the Thundershirt. “Gracey was terrified of the car ride to the vet clinic,” Joanne says. “Every single time, she would poop in her carrier. She would get so nervous that she would foam at the mouth. It was just a horrible experience for her and for us.” That stopped when Joanne began putting the wrap on Gracey, and her veterinary visits became a lot less stressful.

Having your dog or cat already acclimated to wearing something on their body may be helpful in case they ever need it.

“Anything you want an animal to do must be presented in baby steps,” says Kathryn Primm, DVM, chief veterinarian at Applebrook Animal 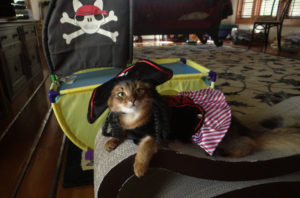 Hospital in Ooltewah, Tennessee. “You just have to work your way toward putting the item all way onto the pet. If at any point the pup [or cat] starts to resist, you have to stop and back up to the point when he/she was last comfortable with the process and start over there.”

Dr. Radosta says, “Your pet may love clothes right off the bat. If he does not, read his body language and check for severity of stress. If he is very stressed, consider that this may not be the best option for your pet. If he isn’t very stressed, introduce the clothing slowly with positive reinforcement including toys, play, food and walks.”

Longtime kitten foster Connie S. uses clothing as part of her socialization process. “Sometimes I get kittens who are very curious about it and try to play with the clothes. Some try to just shrug out of it. Some ignore it altogether and play and run around like it has been a part of them all along. It is generally an adventure for them, something new and novel to explore and learn about. They become more confident kittens for having done it.” Dr. Primm says, “I think that there is a benefit to teaching pets to tolerate clothes and other things that aren’t technically normal for them.” 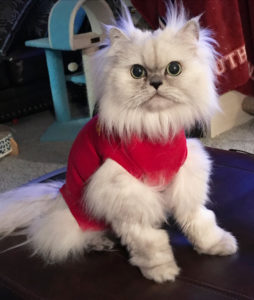 Dogs and cats are often more adaptable and resilient than you might think, as long as you give them the chance. Paula remembers that with Truffle, “When she first got home, she ‘slinked’ around the house a little bit, but she was also on pain medication. After a day or so, she was fine with the shirt.” Out of the over 400 kittens Connie has fostered, “I have only had one kitten have a reaction so poor that I decided to not continue and left him ‘naked.'”

Go slowly, introducing the garment without putting it on at first. Let your pet touch, smell, and interact with it for several sessions before draping it over her. Put it on only when your pet is comfortable with being around the garment, and reward each step generously. Make it a routine. Your dog or cat may never be a fashionista, but she may walk a little prouder in a onesie or a compression garment if the need occurs.

Janiss Garza is an award-winning writer, editor and small publisher. She has written two humorous books of cat advice and publishes the Rescued series of books featuring rescue cat stories from around the world. She also blogs through the point of view of her Instagram-famous therapy cat, Summer at www.sparklecat.com.