What scares pets at Halloween? It’s not the specter of too much chocolate but it can be ghosts, jack-o-lanterns and giant inflatable spiders (those scare us, too).

People—or other animals—in costume, flickering carved pumpkins, and spooky décor can frighten pets who aren’t prepared for them. Help protect them from or prepare them for the following holiday happenings.

Don’t just shove your pet into a costume you purchased for him the day before. Buy it well in advance so you can gradually accustom him to wearing it. Practice putting on the costume a little bit at a time, liberally handing out treats as you do so. Make sure it fits well and doesn’t hinder movement or sight. If your pet doesn’t enjoy clothing or costumes, try something less restrictive such as a special holiday collar or bandana.

Jumping out at your pet while wearing a Spiderman suit might seem funny to you but it won’t be to your dog or cat. Let him watch you put it on so he knows that’s you behind the spidey mask.

A walk in the dark, surrounded by scary figures, may not be your dog’s idea of a good time. Do some trial runs to see how he responds to other people in costume. If he’s not accustomed to night-time walks, seems fearful of people in costume, and doesn’t like flashlight beams or wearing a blinking collar, it’s probably best to leave him at home in a sanctuary room where he can chill out, away from boos, cackles, and costumes. Stock it with toys and treats from his personal BarkBox subscription to keep him entertained and occupied during this hair-raising holiday. 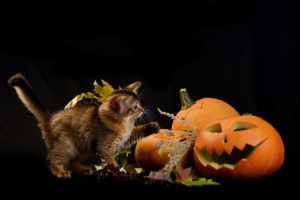 Jack-o-lanterns or large, spooky inflatables may cause fear or increase anxiety because they produce shadows that your pet may find alarming. Don’t force him to go up to them but do let him see you approach them cheerfully. Hand out lots of treats and praise if he follows you and examines the object on his own.

Candy’s Not So Dandy

Gobbling down candy and chocolate can give your pet a bellyache at the very least. It can also cause technicolor vomiting, depending on what he swallows, and ingesting dark chocolate can require a trip to the emergency room. Keep goodies for humans out of reach.